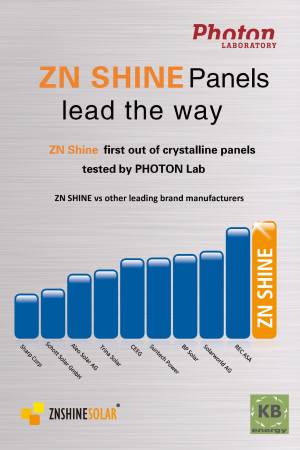 Since 2009, our company produces mounting structure for photovoltaic frames and is established as the official representative agent in Greece and Cyprus of the company ZNSHINE SOLAR, promoting and selling photovoltaic modules with certification of high quality and performance.

Znshine was established on 10th, October, 1988. During the early years, its main business was glass fittings in Changzhou. After 10 years of incessant development, in 1988, Znshine established Fine Right trading Co., Ltd and Zhongshan Zhengxin Lamp decorating Co., ltd. 8 years later, in 2005, Znshine PV lighting Co., Ltd was estabished. In 2006, Znshine invested $50 million in the PV industry, Znshine technology of renewable energy Co., Ltd and Znshine PV-TECH Co., Ltd were established. These above 5 companies joined together as Znshine group in 2009. Zhongshan Zhengxin Lamp decorating Co., ltd is professional in manufacturing glass and crystal lamp decorations. During these years, Zhengxin lamp has become the leader in the lamp decorating industry.

Znshine PV-lighting Co., Ltd is specialized in the induction lamp. The induction lamp is much more advanced than the traditional lamp source. Induction lamp is much more energy-saving, much higher efficiency, and its life is much longer. Now it can produce the induction lamp from 3W-399W.In Feb,2008, it has registered its own brand “brightmax” for the induction lamp. The belief for “Brightmax” is “heathier, more energy-saving, and more responsible for the human healthy”.
Znshine Technology of renewable energy Co., Ltd and ZNSHINE PV-Tech Co., Ltd. are engaged in the PV industry, its products include the mono ingot, mono wafer, solar module and PV system. The two PV companies employ 50 R & D scientists, among with 15 are master's degree holders and 3 are doctor's degree holders. Moreover, another 300 employees are now working in ZNSHINE together with 6 PV industry specialists and 10 bachelor's degree holders of PV major. It has ISO9001:2000, CCC, CE, TUV, UL as its certification. Now in Znshine, a complete production chain forms; every production step from the wafer to the module is strictly controlled by the professional team in Znshine. That is how the high quality module comes out.

In order to increase the transform efficiency and reduce the power decay, Znshine uses IC grade polysilicon as its material. In 2008, Znshine uses a new technology in the ingot pulling process; they use gallium instead of Boron as the dopant. By using this new technology, the power decay is obviously reduced. Now for Znshine modules, the power decay is less than 5% in10 years , less than 10% in 20 years. By using Znshine modules, the customers can return on investment in a much more shorter period.

Znshine is engaged in the green energy and now trying to “leave the sky blue to the descendant”. ZNSHINE group has always been emphasizing quality by seriously observing the ISO9001, TUV, CE standards in every detailed production process. Nowadays, Znshine products are popular worldwide.

Because of its own strong vertically integrated business model including the ingot, wafer, cell & module, Znshine has successfully developed into a more and more important manufacturer in the PV industry. Znshine only chooses IC grade polysilicon as its material in order to produce the best quality wafer. Znshine has established a strict QC system. From the polysilicon material to the production process and the package, every step is controlled by the professional workers using the most advanced testing machines. The most advanced production machines from Japan and Europe are working in Znshine every day, producing 15 million pcs wafers and 60MW modules every year. Znshine has sales network in the EU and its modules is now widely used in projects of in-grid & off grid systems. Znshine also designs special PV power systems. One of them is called the solar induction light, it is widely use in the illumination projects located in tunnel, street and high way. This system has been deemed as one of the most innovative PV lighting system in the world. 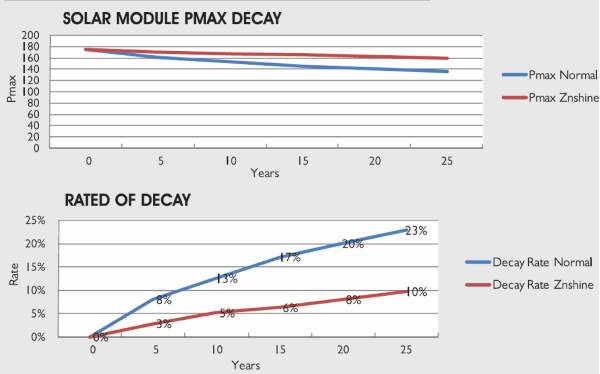 Znshine maintains one of the strictest quality control systems: from the material polysilicon until the production process and packaging, each step is controlled by trained workers using the most advanced testing machines.

Znshine has a sales network in the EU and it's panels are now widely used. Znshine is also planning special photovoltaic power systems, such as solar lighting induction, which is widely used in lighting projects in tunnels, roads and highways. This system has been regarded as one of the most innovative systems of photovoltaic lighting in the world.